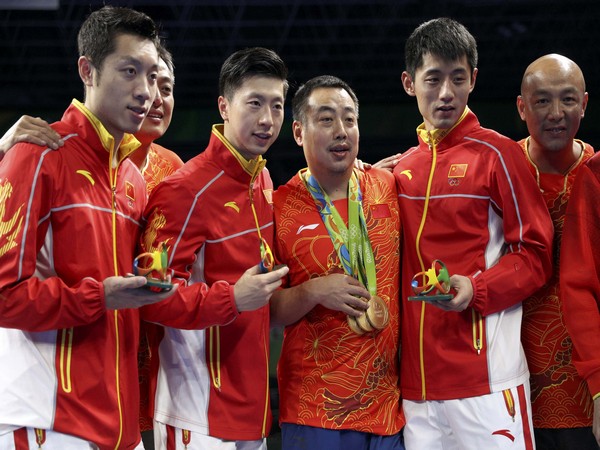 Beijing (China) May 29: Ma Long/Xu Xin and Sun Yingsha/Wang Manyu came out as the eventual winners of the men's and women's doubles respectively at the Chinese table tennis Olympic simulation here on Friday.
Olympic champion Ma and doubles specialist Xu, who partnered to win the world title in Rotterdam ten years ago, beat Fan Zhendong and Wang Chuqin 12-10, 6-11, 11-8, 11-6 for the men's doubles title.
On the women's part, Sun, the youngest member of China's Tokyo Olympic squad announced a fortnight ago, paired with Wang to win over the more established Chen Meng/Liu Shiwen in straight sets, 11-4, 15-13, 11-7.
To cater to the Olympic team events, the simulation competition underway in Nanyang has added the men's and women's doubles matches to its program, with four pairs contending in each category in a best-of-five format.
For this reason, Ma Long and Xu Xin said they took away more than just two victories and a title here.
"We don't have many chances like this to play doubles games in front of the public, that's why we cherished this opportunity so much," said Ma, a Grand Slam winner of Olympic, World Championships and World Cup titles.
"That's why we take every pair very seriously," Xu added. "The victories here have boosted our confidence and will help a lot in the following training and competitions with just 50 days or so ahead of the Tokyo 2020 Olympic Games."
Earlier on Friday, the first reserve of the Chinese Olympic squad, Wang Chuqin, won 4-2 in the men's singles quarterfinals over Zhou Qihao, winner of the Xinxiang simulation early this month.
The 21-year-old will next play world No. 1 Fan Zhendong, who is set to make his Olympic debut in July. Fan earlier denied Lin Gaoyuan a semifinal slot with a five-set win.
In the women's singles event, Sun Yingsha and Wang Manyu set up a semifinal encounter after Sun rallied past GuYuting in full sets and Wang beat Chen Xingtong 4-1.
The mixed doubles draw saw world-title-holding duo Xu Xin and Liu Shiwen book a final against the winners between Wang Chuqin/Sun Yingsha and Zhou Kai/He Zhuojia Yu Ziyang/Wang Manyu.
On Saturday, the Nanyang competition will continue with men's and women's singles quarterfinals. The mixed doubles champions will also be decided.
Source: Xinhua