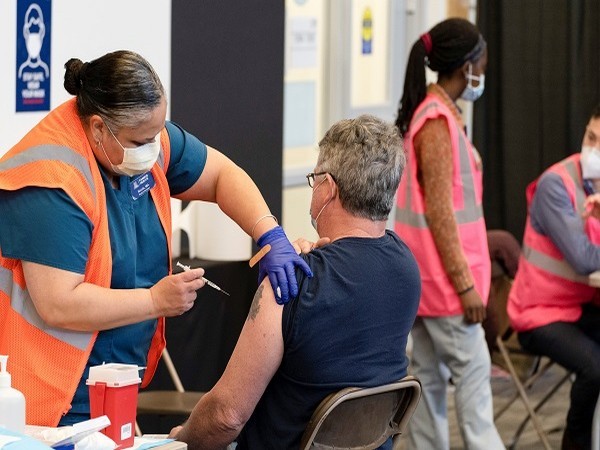 New York (US), September 19: The United States has kept on pushing through federal requirements of broad vaccination by highlighting the efficacy of its three authorized COVID-19 vaccines, while planning to narrow the use of a booster shot only to old people and those who work at high risk.
On Friday, expert advisers to the U.S. Food and Drug Administration (FDA) voted unanimously to recommend that the agency authorize a booster shot of the Pfizer-BioNTech coronavirus vaccine six months after vaccination for people 65 years and older and for anyone at risk for severe illness.
The vote is not binding, and Peter Marks, the FDA official overseeing coronavirus vaccines, indicated that the final decision could be slightly different, encompassing people who are at higher risk of infection because of their professions, such as health-care workers and front-line employees, including teachers.
A decision about boosters from the FDA is expected by next week, and an advisory committee of the U.S. Centers for Disease Control and Prevention (CDC) is slated to meet on Wednesday and Thursday to recommend how a third shot should be used.
According to The New York Times (NYT), the 7-day average of confirmed cases of the pandemic stood at 148,816 nationwide on Friday, with its 14-day change striking a 9-percent fall. COVID-19-related deaths were 1,992 on Friday, with the 14-day change realizing a 28-percent rise.
VACCINE EFFICACY
A head-to-head study of all three authorized coronavirus vaccines in the United States found that the Moderna vaccine was slightly more effective than Pfizer's in real-life use in keeping people out of the hospital, and Johnson & Johnson's Janssen vaccine came in third, but still provided 71 percent protection. Pfizer's vaccine provided 88 percent protection against hospitalization, and Moderna's was 93 percent effective.
The CDC led a nationwide study of vaccination involving more than 3,600 adults hospitalized for COVID-19 between March and August, and announced the findings in its weekly report on death and disease.
Pfizer's and Moderna's vaccines both use genetic material called messenger RNA to deliver immunity, but they use differing doses and slightly different formulations. The Janssen vaccine uses an inactivated common cold virus called adenovirus, a viral vector, to carry genetic instructions into the body.
On Wednesday, Moderna shared a new analysis from its phase three study that showed the incidence of breakthrough COVID-19 cases, which occurred in fully vaccinated people, was less frequent in a group of trial participants who were recently inoculated, suggesting the COVID-19 vaccine's protection wanes over time.
There were 88 identified breakthrough cases out of 11,431 people vaccinated between December and March, the company said in a press release, compared with 162 breakthrough cases out of 14,746 trial participants vaccinated in July through October 2020.
The breakthrough cases were not all the Delta variant's fault, and the COVID-19 cases in vaccinated people might be a result of both vaccine protection waning over time and the highly transmissible variant, Moderna President Stephen Hoge told CNBC, adding that "it's the reason to get ahead of the problem and boost."
MANDATE INFLUENCE
Employees in five industries will especially feel the effects of the U.S. federal government's new vaccine mandate: management, utilities, information, finance and insurance, and administration and waste management services, reported CNN on Friday.
More than 80 percent of the workforce for those five industries are employed by businesses with a staff of at least 100 employees, which means they'll be required to get a vaccine or a weekly COVID-19 test. That's according to 2018 data on U.S. businesses the most recent data released by the Census Bureau in May.
The rules that U.S. President Joe Biden announced last week would apply to more than 80 million working Americans, about two-thirds of the workforce. There are 43 million employees who work at companies that employ fewer than 100 people, and who are not covered by that federal vaccine mandate.
The vaccine mandate will also apply to state and local government workers in 26 U.S. states, some of which have banned vaccination requirements for public employees, thus "setting up another clash between GOP-led states and the Democratic administration," reported USA Today on Saturday.
Biden made no mention of vaccine requirements for state and local workers when announcing new rules, but Labor Department spokeswoman Denisha Braxton confirmed to media that Biden's new rules will "apply to public-sector state and local government workers, including educators and school staff" in 26 states and two territories.
Speaking at a middle school in Washington, D.C., the day after announcing his multipronged approach, Biden called on governors to require vaccinations for all teachers and staff, adding that "this isn't a game. And I don't know of any scientist out there in this field that doesn't think it makes considerable sense to do the six things I've suggested."
Source: Xinhua