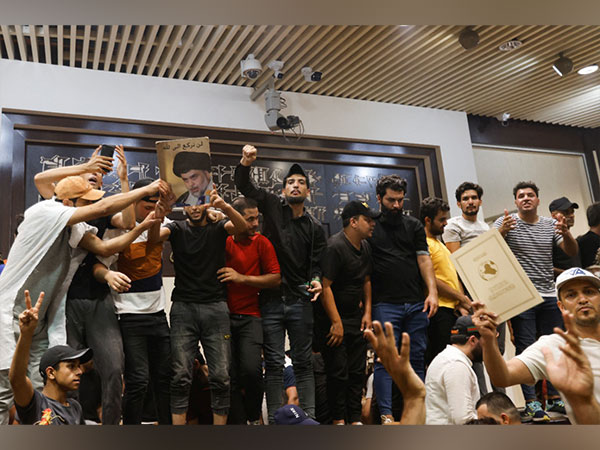 Baghdad (Iraq), July 28: Hundreds of followers of Shiite cleric Moqtada al-Sadr on Wednesday broke into the Iraqi parliament building in central Baghdad to protest against the nomination of Mohammed Shia' al-Sudani for the post of prime minister.
The riot police fired tear gas canisters and warning shots to disperse the protesters, but there were no clashes between the protesters and the security forces, an Iraqi Interior Ministry source told Xinhua on condition of anonymity.
Many videos aired by TV channels and social media showed dozens of demonstrators inside the parliament building waving Iraqi flags and chanting slogans hailing Moqtada al-Sadr.
Iraqi Prime Minister Mustafa al-Kadhimi urged in a statement the protesters to withdraw from the parliament building immediately.
Al-Sadr told the demonstrators to end the protest in a tweet in the evening, saying "your message has arrived ... Go back to your homes safely."
The protest came two days after the Coordination Framework, an umbrella group of Shiite parliamentary parties, nominated Mohammed Shia' al-Sudani for the post of prime minister.
The Coordination Framework became the largest alliance in the Iraqi parliament after al-Sadr ordered his followers in the Sadrist Movement, the biggest winner in the elections held on Oct. 10, 2021, with 73 seats, to withdraw from the parliament.
During the past months, the continuing disputes among the Shiite parties have hampered the formation of a new Iraqi government, as the parliament has been unable to elect a new president by a two-thirds majority of the 329-seat parliament under the constitution.
If elected, the president will appoint the prime minister nominated by the largest alliance in the parliament, the Coordination Framework, to form a new government that would rule the country for the coming four years.
Source: Xinhua