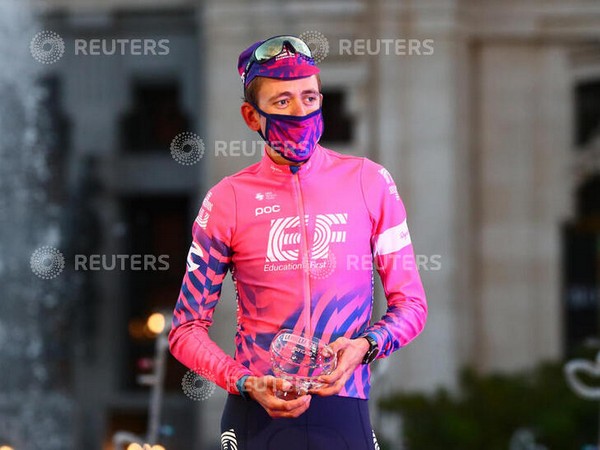 Madrid (Spain), August 18: Jasper Phillipsen (Alpecin-Fenix) won his second sprint of this year's Vuelta de Espana, finishing just ahead of Tuesday's winner Fabio Jakobsen at the end of the 184.4-kilometer fifth stage of the race ending in Albacete (central Spain).
Kenny Elissonde (Trek Sagafedo) is the new overall leader with a five-second advantage over Primoz Roglic (Jumbo Visma), after the boring stage of the race suddenly became dramatic with 11 kilometers left to ride.
Crosswinds on the long, flat stage had been predicted to pose problems for riders.
With 20 kilometers left, three riders produced a breakaway that hung between two or three minutes ahead of the peloton. Oihan Lazcano (Caja Rural) showed he was the strongest rider in the break and left his two companions trailing.
That was the moment the peloton began to pick up speed with the sprinters' teams such as Alpecin-Fenix and Deceuninck-Quick Step, looking to set up their sprint trains, while those more interested in the overall classification also worked to get towards the front, to ensure their lead riders avoided the danger of being caught behind a crash.
Lazcano was swallowed by the group with 15 kilometers left to ride, but with 11 kilometers left to ride, the crash that teams had looked to avoid happened near the front of the peloton as two riders touched wheels, causing a ripple effect and bringing a group of around 50 riders down.
Overall race leader Taaramae (Intermarche-Wanty) was among those affected, with the Estonian hitting the tarmac for the second day in succession.
Although the surviving members of the peloton eased the pace to allow the majority of the riders involved in the crash to rejoin the group, Taaramae was unable to get back as the speed picked up again ahead of the sprint and that means Elissonde will be in the leader's jersey on Thursday.
Thursday's sixth stage is a shorter 158.3 kilometers from Requena to the Alto de Cullera, which ends with a sharp third category climb. The stage could see a breakaway make it to the line, while the race favorites, Promoz Roglic, Egan Bernal, Enric Mas and Mikel Landa will look to take a few seconds off each other in the final climb.
Source : Xinuha