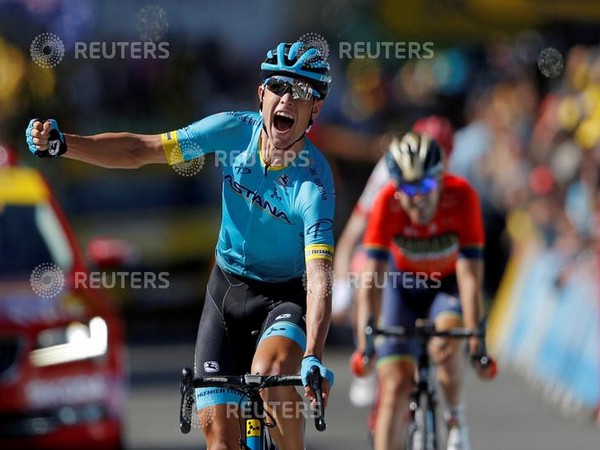 Madrid (Spain), August 20: Magnus Cort Nielsen of EF Education-Nippo produced a brilliant climb to cling on for victory in the sixth stage of the 2021 Vuelta a Espana cycle race on Thursday.
The Danish rider finished ahead of Primoz Roglic (Jumbo Visma) after he had formed part of a breakaway of five riders in the 158.3-kilometer stage between Requena and the Alto de la Montana de Cullera.
Cort-Nielsen had a lead of less than 20 seconds at the bottom of the steep two-kilometer climb which ended the stage, and when Ricard Carapaz (Ineos Grenadiers) attacked from the main bunch at the foot of the climb, it looked as if he would be swallowed up by the peloton.
However, despite collaborating in the break, Cort-Nielsen had maintained reserves and was able to grind his way up the climb, finishing around five meters ahead of Roglic.
Roglic has the compensation of returning to the overall leader's red jersey after his ride, with Enric Mas (Movistar) 25 seconds behind in the general classification.
A stage that looked relatively straightforward on paper, was complicated as it reached the last 50 kilometers by strong winds and a route along narrow, exposed roads among the rice-fields south of Valencia.
This combination produced nerves, a couple of minor falls and ultimately splits in the peloton, which left overnight leader Kenny Elissonde (Trek Sagafredo) and Hugh Carthy (EF Education-Nippo) struggling to maintain touch with the group.
Both riders were able to reconnect with the group, but paid for their efforts on the steep final climb; Carthy, who finished third last year, lost 2 minutes and 50 seconds on the day, while Elissonde lost 4 and a half minutes and the lead.
Friday sees a tough mountain stage between Gandia and Balcon de Alicante, which has two first, two second and two third category climbs, with a finish at the top of the first category Balcon de Alicante, which could produce important changes at the top of the general classification.
Source :Xinuha