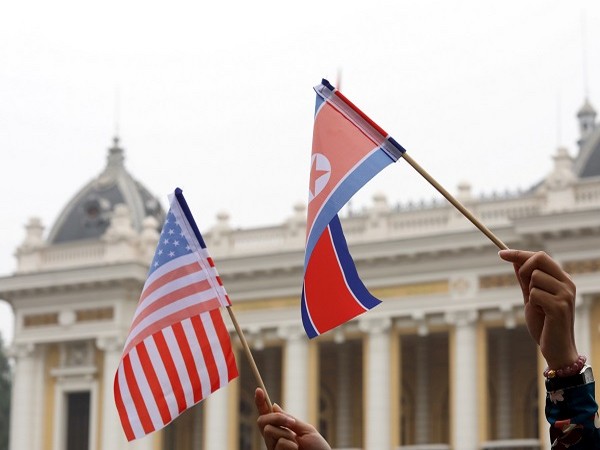 Washington (US), May 2: The United States will not seek a "grand bargain" in denuclearization negotiations with North Korea but will continue to engage with the country to completely denuclearize the Korean Peninsula, White House spokeswoman Jen Psaki said Friday.
The spokeswoman made the remark as she confirmed the completion of the North Korea policy review.
"I can confirm that we've completed our DPRK policy review, which was thorough, rigorous and inclusive," said Psaki. "Our goal remains the complete denuclearization of the Korean Peninsula."
DPRK stands for the North's official name, the Democratic People's Republic of Korea.
The new U.S. administration launched the North Korea policy review shortly after it took office on Jan. 20 to come up with a "new" approach to dealing with nuclear-armed North Korea.
Officials here have pointed to the failures of past administrations to denuclearize North Korea as reasons for the extensive policy review.
"With a clear understanding that the efforts of the past four administrations have not achieved this objective, our policy will not focus on achieving a grand bargain, nor will it rely on strategic patience," Psaki said while speaking to reporters aboard the Air Force One, en route to Philadelphia with President Joe Biden.
"Our policy calls for a calibrated, practical approach that is open to and will explore diplomacy with the DPRK," she added.
Former President Donald Trump held three meetings with North Korean leader Kim Jong-un in 2018 and 2019.
While many have praised the unprecedented U.S.-North Korea summitry for leading to Kim's commitment to complete denuclearization of his country in 2018, many also point out that North Korea still has not denuclearized while continuing to advance its nuclear and long-range missiles.
Biden earlier said the Trump-Kim summits had only given the North Korean dictator the global recognition that he had long sought
"To make practical progress that increases the security of the United States, our allies and deployed forces, we have (consulted) and will continue to consult with the Republic of Korea, Japan and other allies and partners at every step along the way," Psaki said of the new U.S. approach toward North Korea, referring to South Korea by its official name.
She added the input from South Korea and other U.S. allies has played and will continue to play a role in the U.S. policy toward North Korea.
In his address to the U.S. Congress on Wednesday, Biden said the U.S. will work closely with allies to address the threats posed by North Korea and Iran through "diplomacy, as well as stern deterrence."
South Korean President Moon Jae-in is set to hold his first bilateral summit with Biden in Washington on May 21.
North Korea experts here welcomed the outcome of the policy review as striking a balance between the approaches of previous U.S. administrations -- namely Trump's top-down "grand-bargain" approach and the "strategic patience" approach of the Barack Obama administration.
"It is the epitome of balance," said Patrick Cronin, senior fellow and chairman for Asia-Pacific security at the Washington-based Hudson Institute think tank.
"After careful consideration, the administration has chosen to keep open its options without sacrificing U.S. or allies' interests," he told Yonhap News Agency.
Some still cast doubt over the efficacy of the new U.S. approach, largely because of the lack of information currently available.
"While it does seem for sure that diplomacy will lead the Biden administration approach on North Korea, we have no idea on what that actually means," said Harry Kazianias, senior director at the Center for the National Interest think tank.
"Will, for example, North Korea need to make the first move in terms of a concession on its nuclear program? Will the Biden administration be willing to work in a step-by-step manner in regards to phased deal on denuclearization? What roll will new or stepped-up sanctions enforcement play, if any?" he added.
The U.S. has sought to engage with North Korea since mid-February, but Washington said Pyongyang remains unresponsive to its overtures.
A vice foreign minister of North Korea earlier said her country will continue to ignore U.S. outreach until the U.S. abandons what she called its "hostile" policy toward North Korea.
Celeste Arrington, assistant professor of political science and international affairs at George Washington University, said striking a balance between the approaches of the Trump administration and the Obama administration will largely depend on how North Korea responds.
"It sounds like the Biden administration is emphasizing a more measured and reciprocal or step-for-step ('calibrated') approach than the Trump administration. Time will tell if it can achieve incremental ('practical') steps, which will depend in large part on North Korea's response," she said when asked by Yonhap.
"Without some North Korean receptivity to diplomacy or other steps, the Biden administration's approach may end up looking like the Obama administration's 'strategic patience,'" she added.
Arrington noted the new U.S. policy toward North Korea will bode well for the upcoming Moon-Biden summit.
"What struck me more from the comments about the new policy was the repeated emphasis on coordinating with U.S. allies, which is such a departure from the Trump administration and bodes well for President Moon's upcoming summit with President Biden," she said.
"In the meantime, we will have to wait for details about what concrete engagement and deterrence measures the U.S. will take and what actions/reactions" North Korea takes.
Source: Yonhap