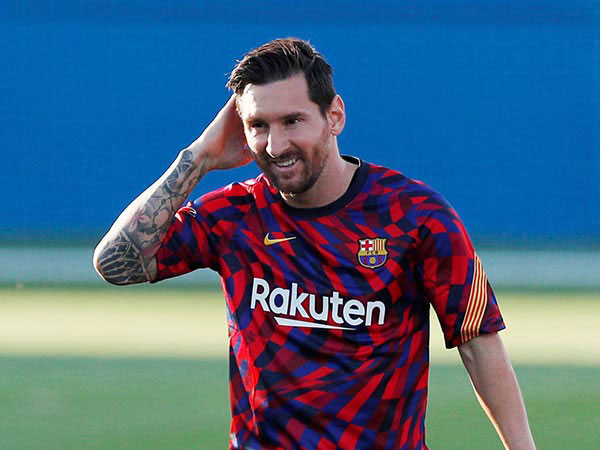 Madrid (Spain), January 17: FC Barcelona face Athletic Club Bilbao in the Spanish Supercup final in the 'Estadio de la Cartuja' in Seville on Sunday night.
Barca have a major doubt over the fitness of Leo Messi, who missed Wednesday's nerve-wracking semifinal win over Real Sociedad after a penalty shootout with a hamstring strain.
The Argentinean wasn't even on the bench on Wednesday and didn't train on either Thursday or Friday, to leave his presence very much in doubt.
Less than two weeks ago, Messi scored twice and hit the woodwork as Barcelona beat Athletic 3-2 in their La Liga clash in San Mames and his understanding with Pedri was vital in that game.
If Messi doesn't recover Barca coach Ronald Koeman is likely to field an unchanged side in the final with Ousmane Dembele's pace down both flanks as one of his side's key arguments in attack, while Ter Stegen continues to be a colossus in goal.
Athletic qualified for the final on Thursday after beating Real Madrid 2-1 in Malaga with a performance that showed just how much they have progressed under new coach Marcelino Garcia Toral in the 10 days since their defeat to Barca.
Marcelino has a couple of injury doubts ahead of the game with left back Yuri Berchiche still sidelined, while his replacement, Mikel Balenziaga suffered cramps on Thursday as did Iker Munian.
Inigo Lekue and either Jon Morcillo or Alex Belenguer would be the most likely replacements if Balenziaga and Muniain fail to recover.
Athletic and Barca have met several times in Cup finals in recent history, with Barca beating Athletic in the 2009, 2012 and 2015 Copa del Rey finals while Athletic hammered Barca 5-1 over two-legs in the 2015 Supercup.
Thursday's win was a huge morale boost to the Basques after a tough first half to the season. Even though nobody can travel to the game, fans have decorated their balconies with red and white flags and replica shirts to show their support.
Barca will be favorites, but Athletic will think they have a chance and if Messi isn't fully fit, that belief will only grow stronger.
Source: Xinhua