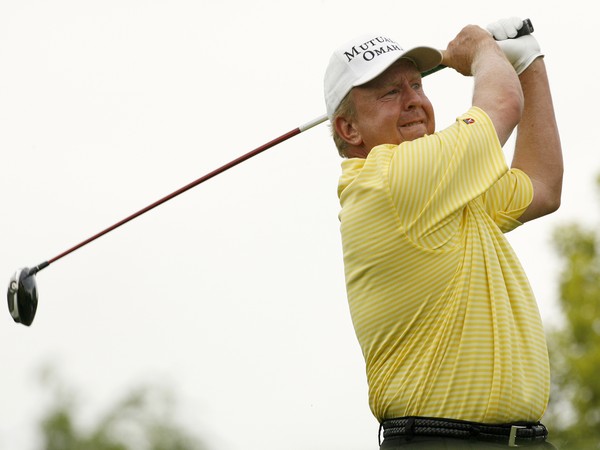 Calgary (Canada) August 15: Billy Mayfair set the early pace at the Shaw Charity Classic in Calgary on Friday as the American carded a first-round 8-under 62 for a one-stroke lead at the only Canadian stop of the year on the 50-and-over Champions Tour.
Canadian Mike Weir, playing at home for the first time since turning 50, carded a 63, to sit second at the 2.35-million-U.S.-dollar tournament at Canyon Meadows Golf and Country Club. Fellow Canadian Stephen Ames was two shots back in equal third with Americans Steve Flesch and Doug Barron on 64.
Americans Brandt Jobe and Ken Duke were equal sixth at three shots off the pace following rounds of 65 under sunny and hot conditions in southern Alberta city.
Mayfair, a five-time winner on the PGA Tour, posted a bogey-free round in the hunt for his first Champions Tour title. The 55-year-old carded eight birdies, including three straight to close, to finish one stroke off the course record.
"Just about everything went right today. Been a long time since I've shot this low and I was real happy with it," said Mayfair. "I haven't played very much since the United States [Senior] Open. I moved from Arizona to Oklahoma and was moving boxes and doing all that stuff for three weeks. Maybe it did me some good because I got here and I was refreshed and definitely had a good day today."
Weir, the 2003 Masters winner, continued to impress in his rookie season on the Champions Tour with a round that included six birdies, a bogey and an eagle three at the par-five 11th hole. The 51-year-old Ontario native is currently eighth on the money list on the strength of his maiden senior win at the Insperity Invitational in May and an equal runner-up finish at the US Senior Open last month.
"It took me a little bit to find my rhythm. I was a little bit up and down. Nice birdie on the first and bogeyed the second and kind of scrambled on the fourth. Then I kind of settled in, made a nice putt on five, and started hitting some good shots after that," said Weir, an eight-time winner on the PGA Tour.
"I caught fire in the middle of the round with a birdie and an eagle on 10, 11, then just kind of stalled a little bit. Had a couple good looks at it and didn't make them. All in all, it was a really good day."
German great Bernhard Langer, third on the Champions Tour money list and the highest-ranked player in the field this week, carded a six-under 68 to sit equal 21st. Other notable scores included Fiji's Vijay Singh at one shot further back on 69 in a group of eight players that included Asian
Tour veteran Fran Quinn. Defending champion Wes Short Jr opened with a 70.
Ames, who won the Principal Charity Classic in Iowa in June for his second senior title, also made an eagle three at the 11th in a round that included five birdies and a bogey.
"It's a good start, yeah. Like Mike [Weir] has mentioned, the mindset has to change when it's three rounds of golf; you've got to get out of the box really quick and get going, so this is obviously going to help."
The nine-year-old tournament is being played in front of 2,000 fans per day, 15 percent of the usual capacity, to allow for greater distancing among spectators. Alberta, Canada's oil capital, has the highest active COVID-19 case count in the country with 4,101 infected.
The western province was scheduled to lift public health restrictions this Monday but with a recent spike in cases they will now stay in place for another six weeks.
Source: Xinhua