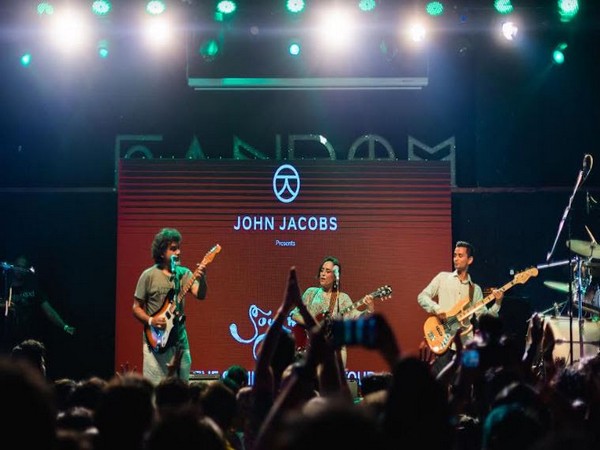 Bengaluru (Karnataka) [India], June 22 (ANI/NewsVoir): John Jacobs, a premium contemporary eyewear brand, has partnered with Overture to bring to life Soulmate's The Summer of Love Tour. Soulmate is a legendary Blues Rock band credited for having revived the Blues Rock phenomenon in India.
Overture, a Bangalore based music management company, has worked with Soulmate several times and this is the biggest Soulmate tour they have produced to date. On the milestone accomplishment Arpan Peter, Founder, Overture, says, "We've worked with Soumate for the better part of a decade and it is an absolute privilege to bring to fruition the idea of doing a multi-city tour with them especially with a young modern brand like John Jacobs. We hope to be able to do a lot more shows with more artists like Soulmate."
Soulmate, widely regarded as the best live act in India, closed the successful first leg of their tour with the band performing to packed houses across Mumbai, Bangalore, Gurgaon, Pune and Hyderabad.
The tour empowered by John Jacobs is a testament to how new-age brands are leaning towards lending support to niche performers from niche genres to create a community of people who crave holistic and newer experiences. John Jacobs' association with Soulmate comes as no surprise because of the brand values they uphold. John Jacobs' brand ethos is essentially a marriage of modern sensibilities with traditional values which reflects in their collection as well.
With patrons riding the wave of emotions driven by nostalgia and the future past, John Jacobs' association with Soulmate is a strategic way to build resonance and impact the existing John Jacobs customer. On the association, Apeksha Gupta, CEO, John Jacobs says, "Soulmate has played a pivotal role in bringing blues-rock to Indian audiences with a refined flair for the past 20 years. Band members Rudy and Tipriti have significantly contributed to the genre with their fresh improvisations and fearless experimentation. John Jacobs customers are ardent patrons of cultivated musical experiences, and Soulmate blends into the zeitgeist they live in."
John Jacobs has been a proud advocate of providing a platform to non-mainstream acts and this sensibility is a strong part of their overall narrative and brand story. The association has proved to be extremely successful and the first leg of the tour was sold out with an upcoming second leg to be announced with cities like Chennai and soulmate's home city of Shillong on the radar. They hope to have many more meaningful associations such as this one and engage with their patrons a lot more through immersive experiences like this one.
This story is provided by NewsVoir. ANI will not be responsible in any way for the content of this article. (ANI/NewsVoir)