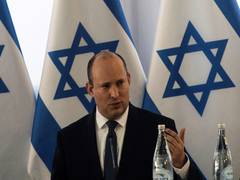 Jerusalem [Israel], April 28: Israeli Prime Minister Naftali Bennett announced on Wednesday that he will pay for his family's food expenses himself, after receiving criticism for "excessive" spending.
"I have always believed that listening to criticism is not dishonorable," Bennett wrote on Facebook, referring to local media reports that the sums were paid by the state for the living costs in his private home in Ra'anana.
"Although my conduct was in accordance with procedures, I am aware of the public feeling and therefore notified my office that from now on all of my family's food expenses will be covered with my private account," he wrote.
Prime ministers in Israel usually move to an official residence in Jerusalem although they continue to spend part of their time in their private home. However, the Bennett family decided not to move out of their private home, incurring criticism from his political opponents that millions of shekels have been spent to provide additional security.
But in an unusual statement by Israel's internal security agency Shin Bet, the agency said it asked Bennett not to move into the Jerusalem residence so that needed renovations could be made to improve its security.
Channel 13 TV news reported that Bennett spent thousands of shekels in taxpayers' money on food purchases and deliveries from restaurants to his private home in Ra'anana, a suburb of Tel Aviv.
In response, the prime minister's office published the expenses paid by taxpayers' money, noting the monthly spending on food during Bennett's time in office was 24,700 shekels (7,448 U.S. dollars) while his predecessor, Benjamin Netanyahu, spent on food 37,000 shekels per month.
Netanyahu is facing a criminal trial on corruption allegations, such as receiving expensive cigars, champaign, and jewellery worth about 1 million new shekels from an Israeli tycoon.
Bennett took office in June 2021 after four rounds of elections and a two-year-long political deadlock. His eight-party coalition includes hawkish pro-settlers and dovish liberals who united to oust Netanyahu, Israel's longest-serving leader.
Source: Xinhua