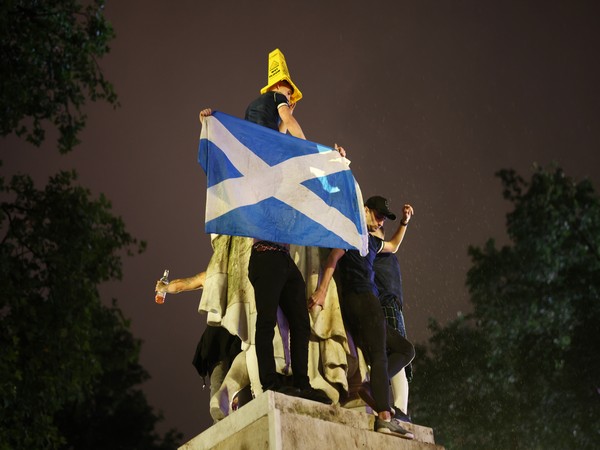 Seville (Spain) June 19: England were held to a goalless 0-0 draw with their oldest rivals Scotland in the second-round Group D match at the Euro 2020 at Wembley on Friday.
England is level on points with the Czech Republic, who held World Cup runners-up Croatia 1-1 in the day's earlier match. Both the teams collected four points from the first two matches while Scotland and Croatia are equal on only one.
Croatia will need to beat Scotland in their final group match to keep their qualification hope alive, and England are to strive for the top spot of the group when hosting the Czechs in the last group action.
England and Scotland met for the 115th time since 1872 when there was the world's first international football fixture. Their previous meeting at a major tournament came in the group stage of Euro 1996, with England winning 2-0.
On the rain-soaked pitch at Wembley, the two teams fought hard in the middle field with England pressing to the front more frequently.
In the 11th minute, John Stones headed Mason Mount's corner to the post. Two minutes later, Mount missed the target by inches after receiving Raheem Sterling's smart low cross in the box.
Scotland, which qualified for the finals of Euro for the first time in 25 years, missed their best chance in the first half as Jordan Pickford barred Stephen O'Donnell's volley with a single hand in the half-hour mark.
England looked dangerous at the beginning of the second half, but Scotland kept calm in defense.
Scotland captain Andy Robertson from Liverpool and Arsenal defender Kieran Tierney played toughly while their 36-year-old goalkeeper David Marshall also made a fine save.
Aston Villa playmaker Jack Grealish and Manchester United forward Marcus Rashford were sent onto the pitch by England manager Gareth Southgate, but the sparks they brought were not enough to break Scotland's defense.
"It was a frustrating night," said Southgate. "You've got to give Scotland huge credit. If you're not going to win a game then it's important that you don't lose it."
Scotland kept their hopes of reaching the knockout stage alive with one point after two games, while England will face the Czech Republic in their last group match as both teams have four points in hand.
"A point keeps us alive and it's important to keep this feeling," said Robertson.
2018 World Cup finalists Croatia suffered another disappointing day after a 1-1 draw with the Czech Republic at Hampden Park.
The key moment in the game came in the 33rd minute when DejanLovren caught Czech striker Patrik Schick in the face with a swinging arm as the pair jumped for a corner. The incident left Schick bleeding badly from his nose and after consulting with the VAR, referee Carlos del Cero Grande pointed to the penalty spot.
Bayer Leverkusen forward Schick converted the penalty to add his tournament scoring tally to three and put his side in front.
Ante Rebic had the chance to draw Croatia level moments later when he found space to the left of the Czech area, but he sliced his effort well wide.
Croatia made two changes at halftime with Luka Ivanusec and Bruno Petkovic coming on, with Rebic one of the players replaced and they were soon level. Andrej Kramaric took a free-kick and Ivan Perisic cut inside from the left before fizzing a right-foot shot past Tomas Vaclic in the Czech goal.
Vlasic volleyed over after Perisic had chested the ball down for him, but with the clock ticking down, there was a feeling that neither side considered a draw to be a bad result.
Also on Friday, Sweden moved to first place in Group E after beating Slovakia 1-0 on Emil Forsberg's second-half penalty kick.
Three-time European champions Spain, who held 0-0 by Sweden in the first round, will host Poland in the other Group E match on Saturday.
Source: Xinhua