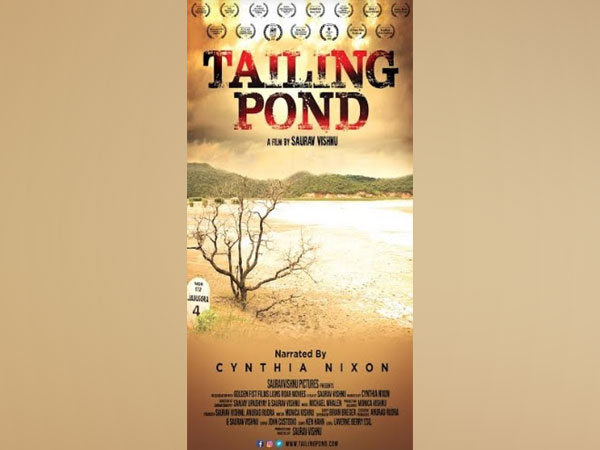 Mumbai (Maharashtra) [India], January 28 (ANI/NewsVoir): Produced and directed by Saurav Vishnu, Tailing Pond is an award-winning documentary short film that traces the impact of uranium mining on the local tribal population at Jadugora in Jharkhand.
Having screened at numerous Indian and international film festivals, Tailing Pond, is now officially in consideration for the 93rd Academy Awards in the Documentary - Short category. American Actress Cynthia Nixon who is known for her stellar performance in numerous Hollywood films including 'Sex and the City' has lent support as the narrator.
As an independent entry from India and with support from Shorts TV, Tailing Pond stands a chance to get officially nominated for the Oscars. The film is up against other leading short films from across the world.
"I feel honored that Tailing Pond stands a chance at the 93rd Academy Awards. I believed that the story of the people in Jadugora needed to be told and heard across the world and I am humbled that the people of Jadugora trusted me and allowed me to enter their lives and share their story. I hope that their story receives the attention it deserves and creates a difference," said Saurav Vishnu, speaking on the development.
"We're proud to join with Cynthia Nixon and the makers of 'Tailing Pond' to bring this issue to light and showcase it across our global platform. This highlights the power of short films and ShortsTV to bring untold stories to global audiences that make change possible and give voices to those, such as the community of Jadugora, who aren't otherwise heard," said Carter Pilcher, CEO of ShortsTV, on supporting Tailing Pond.
Wishing the film good luck on its Oscar run, Rakeysh Omprakash Mehra said more films like this needs to be made and called the film an inspiration and must watch. Abbas Tyrewala called the film an important film in today's time.
Tailing Pond has travelled to film festivals such as New York Indian Film Festival, Jaipur International Film Festival and many more. The film won Best Film award at both festivals.
This story is provided by NewsVoir. ANI will not be responsible in any way for the content of this article. (ANI/NewsVoir)