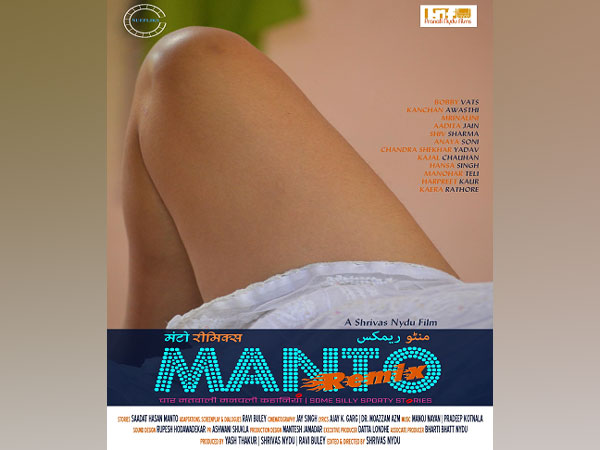 Mumbai (Maharashtra) [India], July 16 (ANI/ThePRTree): The stories of great but controversial Urdu writer Saadat Hasan Manto are all set to hit the screens this time under the title 'Manto Remix'. Filmmaker Shrivas Nydu has brought him on screen.
In Manto Remix, Manto's stories have been specially taken, in which he has written boldly on the relationship between men and women. This is an anthology film. Anthology film is the new trend in Bollywood, in which a film consists of four or five stories. Sometimes they are related to each other and sometimes they are independent of each other.
Manto may have written stories in the period from 1930 to 1950, but in 'Manto Remix', four of his stories are shown in 2021. The film is produced by Mumbai-based Pranati Nydu Films for American company Nuefliks. The film will be released on Nuefliks OTT. The shooting of the film has been done in Vajreshwari adjoining Mumbai.
The man-woman relationship was Manto's favorite subject and he has written extensively on it. But for this he also had to face opposition because these stories of his were accused of being obscene and naked. There were also court cases on some of the stories. Manto's famous statement on this is that 'If you find my stories obscene or dirty, then the society you live in is vulgar and dirty. My stories only tell the truth.
Director Shrivas Nydu says, 'Manto Remix also explores the Men-women relationship of civilised society. There is a post-mortem of the lives inside closed doors. Here such a naked truth comes out, which is disturbing at times.' He said that the four stories included in the anthology are psychological, satirical and full of sarcasm along with examining society and Men - Women relationships. Here are the basic things of love, quarrel, selfishness, tussle, humor and relationship between man and woman.
Producers Yash Thakur, Shrivas Nydu, and Ravi Buley are currently sending Manto Remix to international film festivals in India and abroad for festival screening. Manto Remix stars Bobby Vats, Kanchan Awasthi, Mrinalini, Anaya Soni, Adita Jain, Shiv Sharma, Hansa Singh, Harpreet Kaur, Manohar Teli, Chandrashekhar Yadav, Kajal Chauhan and Kaira Rathore in pivotal roles. The film has three songs.
The lyrics are written by Ajay k Garg and Dr. Moazzam Azm. The music is given by Manoj Nayan and Pradeep Kotnala. The cinematographer of the film is Jay Singh. Manto's screenplay and dialogues are written by Ravi Buley. He says that we call Manto's stories 'remixes' because they have been seen and adapted in our present rather than in the certain period.
According to Ravi Buley, 'Manto's stories are becoming more and more relevant as time passes. Looks like he's talking about our time. The only difference is that the time of these stories is old. Otherwise they belong to today's era. In such a situation, the question arises that if Manto had been alive today, how would he have written. The four stories of Manto Remix have the creative flair to engage with the same question.'
This story is provided by ThePRTree. ANI will not be responsible in any way for the content of this article. (ANI/ThePRTree)