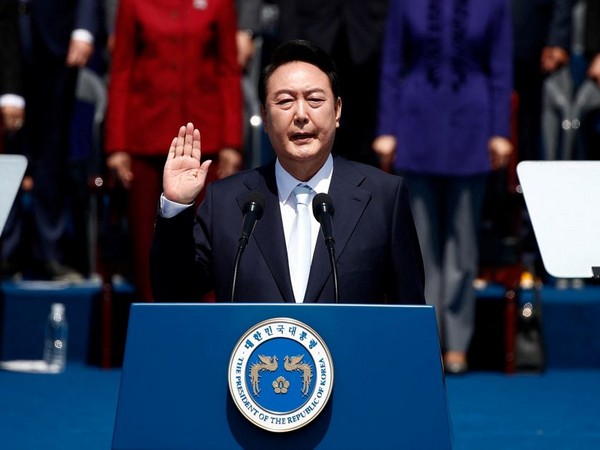 Madrid (Spain), June 29: South Korean President Yoon Suk-yeol talked briefly with Japanese Prime Minister Fumio Kishida during a gala dinner for NATO summit participants in Madrid on Tuesday and expressed hope for the future-oriented development of relations between the two countries, officials said.
The encounter, which lasted three to four minutes at the dinner party hosted by Spain's King Felipe VI, began as Kishida offered greetings to Yoon with congratulations on his inauguration and the local election victory of Yoon's ruling party, according to Yoon's office.
Yoon said in response that he wishes Kishida's Liberal Democratic Party good results in Japan's upcoming upper house elections.
"After the upper house elections, I and my aides plan to resolve pending issues between Korea and Japan as early as possible and move forward in a future-oriented manner," Yoon was quoted as telling Kishida.
In response, Kishida said he is aware that Yoon is making efforts for relations between the two countries and he hopes to work with Yoon to develop "healthier" ties.
On the sidelines of the NATO summit, Yoon plans to hold a trilateral summit Wednesday with U.S. President Joe Biden and Kishida, the first such gathering since their last meeting was held in September 2017.
Bilateral ties between Seoul and Tokyo have suffered from historical disputes stemming from Tokyo's 1910-45 colonial rule of the Korean Peninsula.
Yoon and first lady Kim Keon-hee attended the gala dinner. Dressed in a black suit and gold tie, Yoon arrived at the Royal Palace of Madrid with Kim, who wore a white dress and white gloves.
The president and the first lady were greeted by the royal couple. Yoon then took part in a group photo with other leaders before proceeding to the dinner. Yoon and Biden shook hands during the photo shoot.
Source: Yonhap