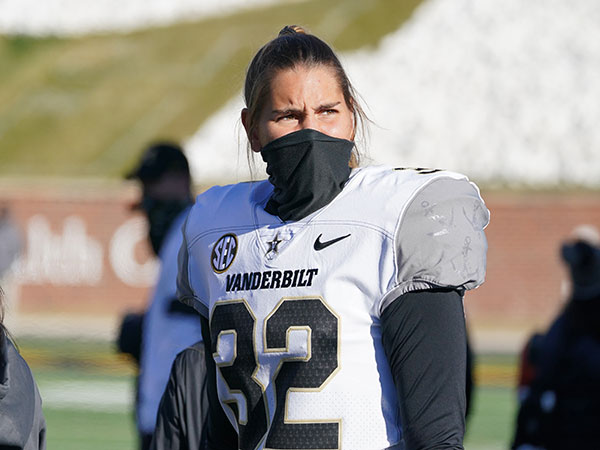 Washington (USA) November 29: Sarah Fuller became the first woman to appear in a football game for a Power 5 Conference when she kicked off for Vanderbilt to begin the second half against Missouri.
Vanderbilt was down 21-0 in the first half and didn't get into field-goal range or score a touchdown to allow Fuller to contribute to the score. The Commodores only had 87 yards in the first half.
Missouri would win 41-0.
Fuller became the first female to appear on a football field for an SEC school or any Power 5 conference team. Power 5 schools play in the ACC, Big 12, Big Ten, SEC or Pac-12.
"Let's make history," the senior Commodores goalkeeper wrote in a tweet with a picture of her in football gear with a soccer ball next to her and a football in her hands on Friday when she learned she was going to suit up for Vanderbilt.
She wore the phrase "Play Like A Girl" on the back of her helmet.
"I think it's amazing and incredible. But I'm also trying to separate that because I know this is a job I need to do, and I want to help the team out and I want to do the best that I can," she said. "Placing that historical aspect aside just helps me focus in on what I need to do. I don't want to let them down in anyway."
Sen. Marsha Blackburn, R-Tenn., was among those who praised Fuller for her accomplishment.
"Vanderbilt University's Sarah Fuller has broken another barrier for women today. She's an inspiration to young female athletes across the country," she said in a statement.
Vanderbilt coach Derek Mason called on Fuller after the special teams unit was left bare due to COVID-19 restrictions and protocols. Mason reached out to soccer coach Darren Ambrose for help.
Fuller was seen kicking field goals in practice Friday.
Fuller would replace Pierson Cookie and Wes Farley. Cooke is 3-for-7 this year and Farley is the backup. Mason said he reached out to Ambrose about seeing whether Fuller would be interested. Fuller began kicking for the football team in practice Tuesday.
"I just wanted to see how strong her leg was, and I can tell you she's got a strong leg," Mason said earlier in the week. "We'll see what that yields. I mean in terms of distances, I'm not into talking about that. I got another like day to day to go in there and evaluate exactly where she sits. ... She seems to be a pretty good option."
She started nine of Vanderbilt's 12 games during the season, recording three shutouts and seven wins. She had an 0.97 goals-against average.
April Gross was the last female to play in a college football game. She kicked an extra point for Kent State in the first half in September 2015.
Source: Fox News