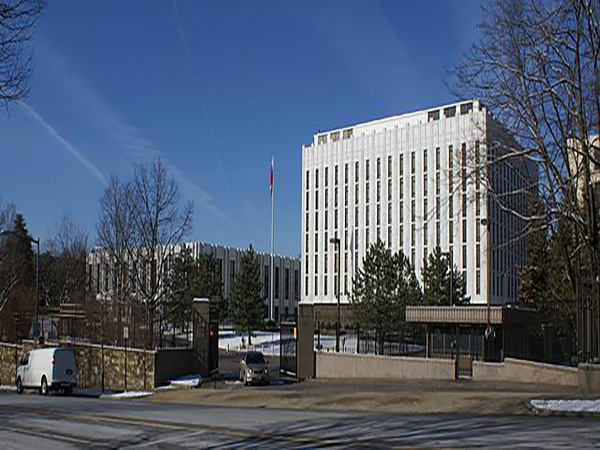 Washington DC (USA) Oct 16: Russia prioritizes the unconditional extension of New START (Strategic Arms Reduction Treaty), Russian Ambassador to Washington Anatoly Antonov said during a session of the US-Russia Business Council. His address was published on the embassy's Facebook.
"We need to remember that strategic issues have always been the cornerstone of our relations under any circumstances. We hope that the United States will carry out a policy that does not seek military advantage over Russia. Our primary aim is to extend START Treaty immediately without any preconditions. Such proposal was made by Russian president Vladimir Putin in December, 2019," he said.
"In his pre-recorded video address to the 75th anniversary session of the UN General Assembly on September 22, 2020 president Putin reiterated that extension of the Russia-US Strategic Arms Reduction Treaty is the issue of primary importance that should and must be promptly dealt with," the ambassador added.
A deep crisis of confidence
When asked about the prospects of the treaty's extension, the ambassador stressed: "We are concerned about the deep crisis of confidence in relations between the two leading nuclear powers. The primary shared interest for Russia, the United States and the entire world is to maintain strategic stability, prevent an arms race and reduce the risk of military incidents."
"With the erosion of the architecture of international security that was shaping during for the past 50 years and served to prevent the cold war from turning into a hot one, it is particularly important to maintain the regime of transparency and confidence-building measures in strategic areas in accordance with the New START Treaty," Antonov added.
"We are satisfied that our teams have started dialogue on strategic stability. We have had a few rounds of consultations in Vienna. These consultations have been practical, useful, aimed at a compromise," the diplomat pointed out. "The Russian side looks forward to further progress of the talks. But the potential result could be very sensitive and delicate."
"In order to meet the interests of the USA and the Russian Federation, there should be no place for any attempts to get significant unilateral advantages in the military political sphere. We cannot single out just one problem and forget about the necessity to find a compromise on all key factors of strategic stability," Antonov noted.
"We need a stability formula with equal rights and obligations. Russia's main concerns are global missile defense system, the development of non-nuclear strategic offensive weapons within the framework of the concept of a global strike, the growing threats of weapons deployed in space, quantitative and qualitative imbalances in conventional weapons in Europe and so on," the ambassador continued.
"We are ready to continue intensive consultations to find solutions to these key factors of strategic stability," he concluded.
A period of instability
Russia thinks that if New START (Strategic Arms Reduction Treaty) is not preserved, a period of unpredictability will follow, and the risk of nuclear weapons being used will be greater, Russian Ambassador to Washington Anatoly Antonov said during a session of the US-Russia Business Council.
The Russian ambassador deemed New START "the latest agreement to limit the two largest nuclear arsenals in the world," noting that its potential termination "is indeed a very disturbing, but very real prospect."
"Without preserving the Treaty, a period of unpredictability will begin in 2021. With the weakening of transparency measures and the reduction of communication channels, the mutual understanding of our countries regarding each other's strategic nuclear arsenals will be significantly reduced. The risk of accidental or unintentional use of nuclear weapons will increase, as will the likelihood that a crisis situation could quickly escalate into a nuclear conflict," he said in a speech published on the embassy's Facebook account.
"Let me remind you that we did our best to avoid such a scenario. We continue to conduct a dialogue with the American side on a wide range of arms control issues, in which the fate of the New START Treaty is a priority," the diplomat stressed.
"Whatever the outcome of these efforts, Russia is ready for any development of events. We have the necessary potential to ensure national security. Without getting involved in a costly race of nuclear missile arms, we will continue to search for ways to preserve the foundations of strategic stability and international security," he said.
About New START
The Russian-US New START treaty took effect in 2011. Under its terms, either party shall reduce its strategic offensive arms in such a way that by the end of a seven-year period following the moment the treaty takes effect, it should have no more than 700 deployed intercontinental ballistic missiles, submarine-launched missiles and heavy bombers, 1,550 warheads for them and 800 deployed and non-deployed ICBM and SLBM (submarine launched ballistic missiles) launchers and heavy bombers.
The treaty shall stay in effect for ten years (up to 2021) unless it is replaced by another agreement by that moment, or it can be prolonged for no more than five years (until 2026) by mutual consent. Lately, Moscow repeatedly urged Washington to avoid delays in prolonging that treaty, which it described as a gold standard in the field of disarmament.
Earlier, Russian President Vladimir Putin told the Financial Times newspaper that if New START ceases to exist, there will be nothing stopping the next arms race.
Source: TASS

Policeman fired in Illinois after killing...

Have always felt deeply connected to...

Important to work with like-minded partners...