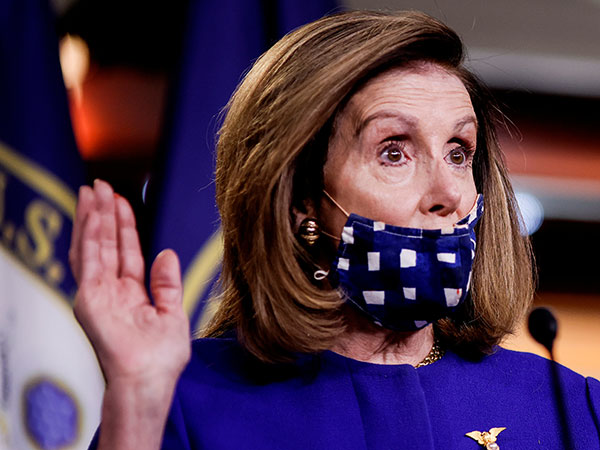 California (USA) October 14: House Speaker Nancy Pelosi, D-Calif., accused CNN anchor Wolf Blitzer Tuesday of being "an apologist ... for the Republican position" during a stunning interview in which she grew visibly frustrated with "The Situation Room" anchor's questions.
The fireworks began when Blitzer asked Pelosi why she "won't accept the president's latest [coronavirus] stimulus offer."
"I hope you'll ask the same question of the Republicans on why they don't want to meet the needs of the American people," Pelosi responded. "But let me say to those people because all of my colleagues -- we represent these people ... and their needs are not addressed in the president's proposal. So when you say to me, 'Why don't you accept theirs?' Why don't they accept ours?"
Blitzer interjected, telling Pelosi that Americans "really need the money now" and quoted Rep. Ro Khanna, D-Calif., who recently said, "People in need can't wait until February. $1.8 trillion is significant & more than twice the Obama stimulus ... Make a deal & put the ball in McConnell court."
"So what do you say to Ro Khanna?" Blitzer asked.
"What I say to you is I don't know why you're always an apologist -- and many of your colleagues [are] apologists for the Republican position," Pelosi fired back, adding "Ro Khanna, that's nice, that isn't what we're going to do and nobody's waiting til February."
The contentious exchange continued when Blitzer pressed Pelosi again about Trump's $1.8 trillion proposal, asking her, "why not work out a deal with him and don't let the perfect, as they say here in Washington, be the enemy of the good?"
"Well, I will not let the wrong be the enemy of the right," Pelosi fired back.
"What's wrong with $1.8 trillion?" Blitzer asked.
"You know what, do you have any idea what the difference is between the spending that they have in their bill and what we have in our bill?" Pelosi asked before ticking off a list of her issues with the proposal.
"That is precisely why, Madame Speaker ... it's so important right now," Blitzer responded "Yesterday, I spoke to [former Democratic presidential candidate] Andrew Yang, who says the same thing. It's not everything you want but there's a lot there."
"But you know what? Honest to God!" Pelosi complained. "You really- I cannot get over it because Andrew Yang, he's lovely. Ro Khanna, he's lovely. They are not negotiating this situation. They have no idea of the particulars. They have no idea of what the language is here ...
The tension carried on until the very end, when Blitzer attempted to wrap up the interview after the speaker accused him of "defending the administration all this time."
"We'll leave it on the note that you're not right on this, Wolf, and I hate to say that to you," Pelosi told the CNN anchor. "But I feel confident about it and I feel confident about my colleagues and I feel confident in my [committee] chairs."
Blitzer responded, "It's not about me, it's about millions of Americans who can't put food on the table, who can't pay the rent, and who are having trouble getting by."
"And we represent them, we represent them," Pelosi repeated several times over Blitzer.
"As we say, don't let perfect be the enemy of the good," Blitzer reiterated.
"It is nowhere near perfect ... we're not even close to the good," Pelosi shot back. "Thank you for your sensitivity to our constituents' needs."
"I am sensitive to them because I see them on the street begging for food, begging for money," the anchor said.
"Have you fed them?" Pelosi blurted out. "We feed them, we feed them."
Tuesday was not the first time the speaker verbally attacked a journalist during an interview.
In August, Pelosi lashed out at "PBS NewsHour" anchor Judy Woodruff, accusing her of being an "advocate" for Republicans during another heated negotiating period on coronavirus relief.
Source: Fox News