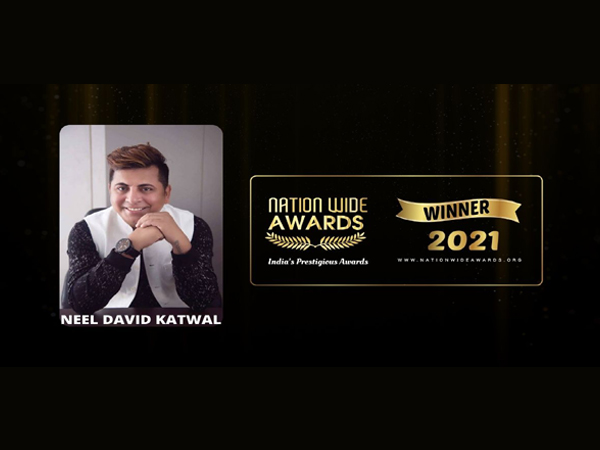 New Delhi [India], July 21 (ANI/PNN): Internationally acclaimed hairstylist Neel David Katwal has been selected for a prestigious award by Business Mint, India's leading Market Research Company.
Neel David, who hails from Nepal, has trained under Oscar-winning makeup artist Christine Blundell and runs a chain of more than 50 salons across India and Nepal. He has also launched an Academy to train the next generation of hairstylists and makeup artists.
The Business Mint award jury was highly impressed by Neel David's unique ideas and his dedication to the art of hairstyling and presented him with the "Inspiring Hairstylist of the Year - 2021" Award to recognize his efforts.
Neel David got attracted towards hairstyling while studying fashion designing at the International Institute of Fashion Technology (IIFT), Delhi, and has never looked back. He was trained in Thailand and London and also got the opportunity to learn from Blundell. From launching a small salon in a mall in Kathmandu in 2006, and one in Siliguri in West Bengal in 2008, Neel David has come a long way to become an international brand.
Today, Neel David runs a chain of more than 50 salons operating in multiple cities in Nepal and India, and many more are planned in India and even in China.
Neel David also launched the Neel David International academy to train budding makeup artists. The number of academies has grown to ten over time. The academy's pass-outs are employed in organizations across Nepal, India, Dubai, Qatar, Bahrain, Australia, UK, US, Portugal, Bhutan, and other places, and many have even launched their own ventures.
The academy has also recently collaborated with Maiti Nepal, one of the largest organizations in the country founded by CNN awardee Anuradha Koirala, to work towards the empowerment of girls and women.
Neel David's International Academy plans to expand further and is set to announce new franchisees across India later this year. As a part of giving back to society, the renowned hairstylist is also set to launch the Neel David Foundation next year, which will bear the cost of training 100-200 students from underprivileged backgrounds in Nepal and India each year.
Neel David's Salon and Academy employ more than 1,000 people at present and aim to recruit over 5,000 men and women by 2025.
This story is provided by PNN. ANI will not be responsible in any way for the content of this article. (ANI/PNN)