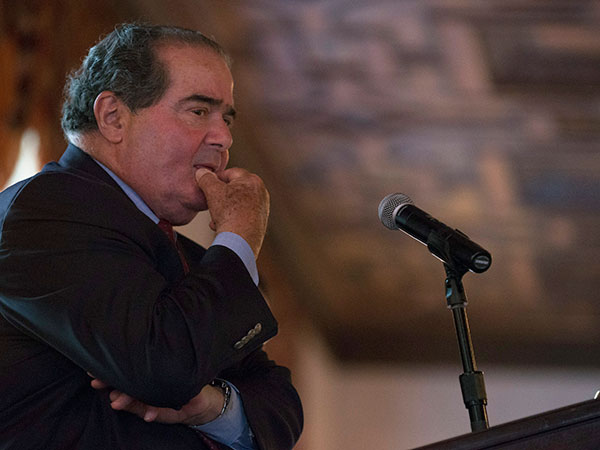 Washington (USA) October 14: Late Supreme Court Justice Antonin Scalia and his colleague, Justice Stephen Breyer, debated in 2009 over whether the Court should decide cases through the originalist framework currently advocated by Judge Amy Coney Barrett, or a more progessive lens that portrayed the Constituton as a living document.
Scalia, known for his originalist approach, blasted the idea that the Constitution was evolving and could be applied to issues like abortion and assisted suicide. Rather, he said, the Democratic process requires that legislatures create laws on particular issues.
"I don't pretend that my approach -- originalism -- has all of the answers. Some of the answers are hard. I know what I'm looking for, sometimes it's hard to find it, sometimes maybe you can't find it, but I don't have to prove that my approach is perfect. And my approach, by the way, is the traditional approach. This stuff begins with the Warren court," he said, referring to former Chief Justice Earl Warren and the idea of an evolving Constitution.
"John Marshall is where it begins," Breyer shot back. Under former Chief Justice John Mashall, the court famously established judicial review, or the idea that courts can strike down laws they deem unconstitutional, in the 1803 Marbury v. Madison decision.
Breyer indicated that the originalist approach risked getting bogged down in historical details and, in doing so, betray the basic principles advocated by the framers of the Constitution.
"There'll be a Constitution but that Constitution not only won't work, but it would be a Constituton that would violate the basic principle in the framer's mind -- the basic principle that they're creating a document that includes certain values that will last for hundreds of years, and they wanted that above all," he said.
He argued that the Court similarly upheld a core value when it struck down school segregation in Brown v. Board of Education. "When the people of the United States passed that 14th Amendment, they were trying to create circumstances of equality, where people would be brought into society who were slaves. That was their object ... they tried the separate and equal thing and it didn't work," he said, referring to the standard overturned by Brown and affirmed earlier in Plessy v. Ferguson.
"So, it led to total segregation. So, the basic value underlying the 14th Amendment is a value that says no segregated schools."
Scalia argued, however, that more progressive jurisprudence provided "no answers" and that justices essentially made decisions by closing their eyes and deciding what they "think is a good idea."
"Once you abandon the original understanding of the text ... there is no other criterial," he said.
When Scalia suggested that Breyer and others made decisions by looking at the ceiling, Breyer countered: "I'm busy reading all these law books."
During another event in 2005, Scalia dismissed the idea that more progressive jurists sought to provide flexibility through their decisions.
"If you think aficionados of a 'living' Constitution want to bring you flexibility, think again. You think the death penalty is a good idea? Persuade your fellow citizens to adopt it. You want a right to abortion? Persuade your fellow citizens and enact it. That's flexibility. Why in the world would you have it interpreted by nine lawyers," he said.
Source: Fox News