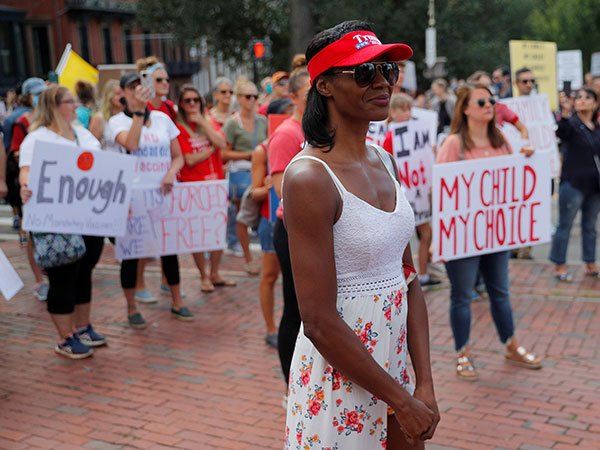 Massachusetts (USA) October 14: Rayla Campbell, the Republican congressional hopeful challenging Rep. Ayanna Pressley, D-Mass., in November says she was attacked by two women at a Trump rally on Columbus Day.
The incident left her with a sprained finger, fractured tibia and a mild concussion, Campbell told Fox News on Tuesday.
Campbell, who is the chair of Black Voices for Trump in Massachusetts, said she was walking through a parking lot after the rally when a woman drove in front of her car. The driver and passenger began to verbally assault her, according to Campbell.
"We've done so much, so much over many years. And, you know, it feels like we're taking steps back instead of moving forward," she said.
Responding to the women, Campbell took out a microphone.
"Why are you screaming Black Lives Matter at a Black candidate, telling me I don't know what it's like to be Black?" she recalled saying.
The fight escalated when the women got out of the car and started pushing Campbell and then tried to take her microphone, the congressional hopeful said.
"We've only got a couple of weeks before the election," she said. "There's no reason that we can't go out and love our country and have to be in fear of being attacked."
After a few times of being pushed around, Campbell said she began to fight back.
"I'm not going to be a punching bag for anybody," she said. "I'm a strong American woman."
Campbell later took to Facebook to provide an update to followers about her condition.
"I got kicked in the head and have a fractured tibia," she posted.
She told Fox News the incident left her in the hospital for several hours and she is now using crutches and a stability brace on her knee. However, she says that won't stop her from campaigning.
John Paul Moran, another Republican in the state running for Congress, posted on Twitter that he was also threatened "with death" by "ANTIFA Joe Biden supporters" for being a gay conservative. He said Campbell "was just beat up and hospitalized" by "ANTIFA."
The Boston Herald reported last month that the state's highest court rejected Campbell's petition to appear on the ballot for not collecting enough signatures. She still received 1,216 write-in votes during the primary.
"I'm continuing to fight and we're just going to be a big thorn in the side" of the Democrats, she said, according to the outlet.
The New Bedford Police Department did not immediately respond to Fox News' request for comment.
Source: Fox News