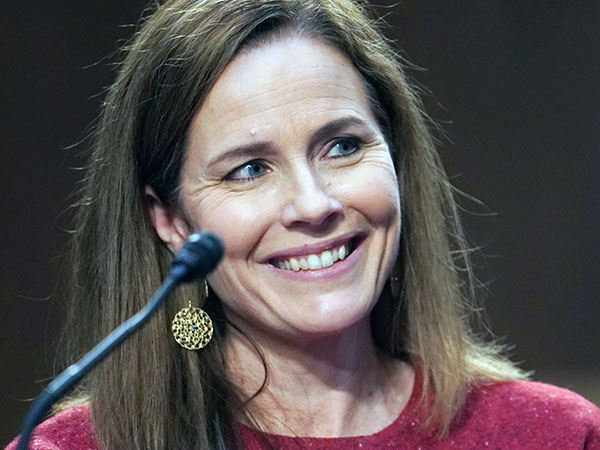 Washington (USA) October 14: Amy Coney Barrett distanced herself on Tuesday from President Trump's public requests of his Supreme Court nominee and told the Senate Judiciary Committee that the commander-in-chief never asked her how she'd rule on abortion and the Affordable Care Act.
While she didn't commit to recusing herself from any case that could decide the outcome of 2020 election, Barrett told senators that she'd be no one's pawn in deciding November's election.
"I certainly hope that all members of the committee have more confidence in my integrity than to think that I would allow myself to be used as a pawn to decide this election for the American people," Barrett said.
Democrats have charged that Barrett was nominated by Trump to do his political chores, including ruling against the Affordable Care Act in a case before the Supreme Court on Nov. 10 and ruling in his favor should the election between Trump and Democratic nominee Joe Biden wind up in the courts.
"Judge Barret, your nomination for a lifetime appointment to the highest court in the land comes before us under a cloud," Sen. Dick Durbin, D-Ill., said Monday. "You have been nominated by a president who shows contempt for the Constitution, but does not hesitate to tell his loyal followers that you are being sent to the bench to do his political chores-abolish the ACA, rule in his favor in an election contest, and even more."
Trump has been clear on what he wants in his Supreme Court picks. He has previously pledged to nominate "pro-life" judges. And he criticized Chief Justice John Roberts for upholding Obamacare and said he wants judges who would rule otherwise.
Sen. Amy Klobuchar, D-Minn., presented Barrett with a poster-size picture for Trump's 2015 tweet on how he'd expect his nominee to rule on healthcare.
"Do you think we should take the president at his word when he says his nominee will do the right thing and overturn the Affordable Care Act?" Klobuchar asked.
"I can't really speak to what the president has said on Twitter," Barrett answered. "He hasn't said any of that to me."
Barrett said no one from the White House has asked her to make commitments on any judicial case, including healthcare, abortion and a potential election dispute case.
"I am 100 percent committed to judicial independence," Barrett said.
While Barrett has expressed pro-life views in her personal life, she told senators that she has no agenda coming to the court.
But in a clue of how she views the landmark Roe. v. Wade case that gave women a legal right to have an abortion, Barrett said she does not view it as "super precedent," meaning that it could be subjected to legal challenges.
"I'm answering a lot of questions about Roe which I think indicates that Roe doesn't fall into that category," the Supreme Court nominee told Klobuchar.
Source: Fox News